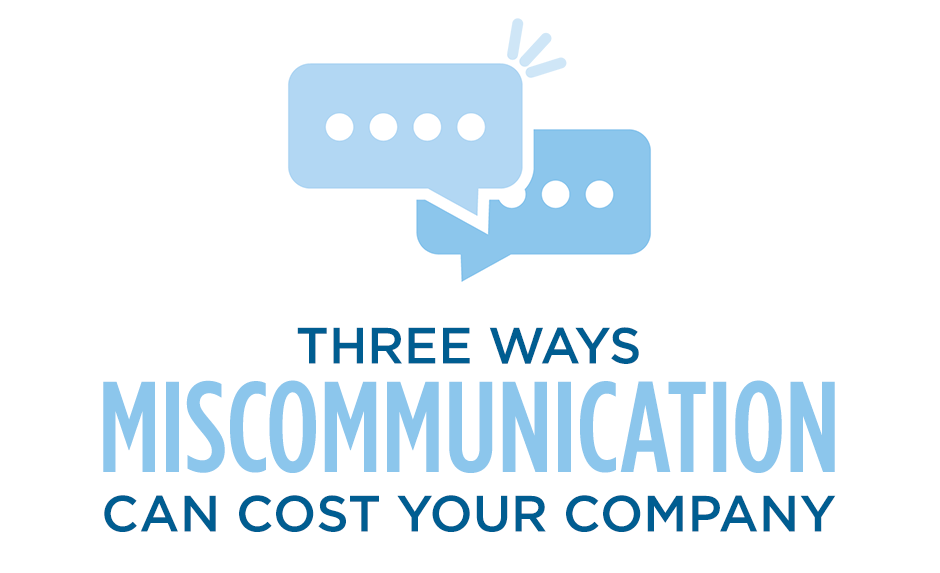 Eastridge Blog posted by Molly Delattre on May 5, 2019

We can all agree that miscommunication in the workplace is frustrating, but did you know that it costs companies millions of dollars every year? A survey of 400 companies cited an average loss per company of $62.4 million a year due to communication blunders.

With the increased ease of communication (through email, instant messaging platforms, and social media) and remote work cementing itself as the new norm, establishing communication best practices for your organization has never been more critical. Communication failures, even of the smallest kind, can result in major project delays, tense business relationships, and ultimately, lost profits. Having communication standards in place will prepare your business to both avoid and remedy any headaches that result from miscommunication in the workplace.

Here are three common miscommunication scenarios your company should avoid:

According to HR Dive, one example of a lack of context in communication came from Yellow Pages, the company that publishes telephone directories. In a 2015 marketing campaign, more than 250 billboards across Canada advertised the use of their app to find "the best cup of coffee" or "fast fashion" in the neighborhood. Unfortunately, one ad erroneously promoted the Korean dish Bibimbap using an image of noodles instead of rice. Photos of the ad were shared across social media, and Yellow Pages quietly issued an apology on social media in response. Soon after, the entire marketing campaign was terminated.

Maintaining brand trust for your company is critical. In this case, the ad designer’s lack of cultural context led to a damaging moment for Yellow Pages. To prevent this cause of miscommunication, everyone involved in a project should be given ample time to ask questions and review their work. Consider involving a subject matter expert to ensure the project’s authenticity.

Occurring at any point during the product or project lifestyle, making assumptions can create lasting and expensive mistakes.

For example, according to HR Dive, the beverage industry in the early 90’s was focused on developing clean and natural products. Pepsi tried to take advantage of this fad by releasing Crystal Pepsi, a clear and caffeine-free version of the traditional drink. Initially, the novelty of the drink reaped a profit, but the success was short-lived; consumers avoided Crystal Pepsi in part because it didn’t have the traditional Pepsi flavor. Less than two years after appearing on shelves across the nation, Crystal Pepsi was retired from production.

Then-COO, David Novak, admitted to ignoring the possibility of the drink’s failure. Pepsi’s lack of consumer research and ensuing assumption resulted in the loss of millions of dollars.

Key takeaways can be easily buried when delivered in a series of lengthy or excessive messages.

HR Dive notes that multiple researchers on information overload have estimated that excess information could cost the U.S. economy anywhere from $900 billion to $1.3 trillion in annual value. A study of office workers in Ottawa, Canada found that they often experienced miscommunication with their bosses through e-mail. E-mails are usually the culprit of overcommunicating because they're easily composed and sent. The frequent miscommunication for the Canada employees necessitated follow-up e-mails and conversations that forced timelines on projects to slow.

When messages are delivered in an easy-to-read format and provide only the most relevant information, miscommunication can be avoided.

Is your company interested in revamping or establishing communication best practices for its employees? Contact Eastridge Workforce Solutions today to learn more about our communication standards and how to implement them at your organization.

﻿An optimized LinkedIn profile can make your skills stand out even more to potential employers. These five tips can help you attract the right opportu...

﻿In 2022, Eastridge is celebrating our 50th anniversary as a company! We’re reflecting on all of our growth, accomplishments, and history over the las...

﻿Every year, Eastridge upholds a tradition of making a charitable donation on behalf of all our clients in lieu of holiday gifts. This year, we are ex...