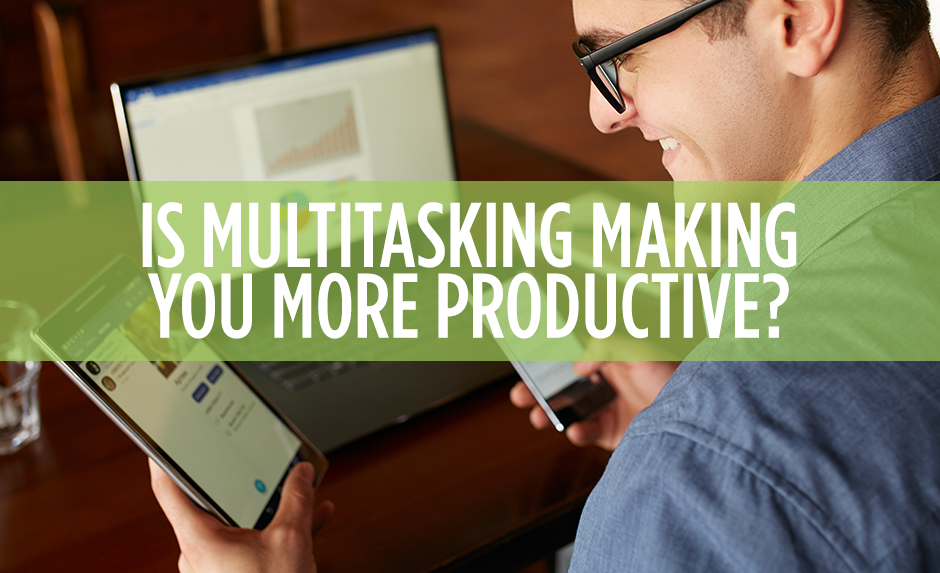 Is Multitasking Making You More Productive?

With the world at our fingertips, it’s easier and faster than ever to get things done. We’ve grown accustomed to instant gratification and the satisfaction of crossing multiple things off the to-do list at once. Multitasking is second nature to nearly everyone and it usually goes unchecked.

How often do you find yourself multitasking in order to get things done? And is it recommended to multitask at all?

The science is clear for nearly all people in nearly all situations. Multitasking is impossible. Instead of doing two things at once, you’re actually completing individual actions in rapid succession. Humans are wired to be mono-taskers, so the feeling of accomplishment that comes with multitasking is simply an illusion.

Multitasking is a hard habit to break and will require conscious effort to change, but try to consider the following before listening to that economics podcast while drafting a proposal and eating lunch at your desk:

You’re hindering your ability to learn

This is a gradual effect of multitasking and an important one to note. Attention is essential to learning. When multitasking, we’re unable to engage in deeper processing and learning. Texting, listening to music, and checking emails are various side activities hindering your potential to learn.

It’s illegal to text and drive for a reason. According to one study, “individuals who are heavy media multitaskers adopt a style of attention control that favors parallel processing of multiple information sources over-focus on one primary task.” In short, when multitasking, you’re not paying attention to the task at hand.

You’re not living in the moment

Mindfulness is an advanced form of attentiveness. When living in the moment, you’re able to make decisions free of stress and judgment, and who doesn’t want that? Making a decision, especially related to business, is tough enough without the influence of your emotions from reading the news.

The science is out there, multitasking is doing you a disservice. So the next time you’re feeling stretched thin, take a moment to slow down. You’ll perform your best when taking things one task at a time.

﻿For volume recruiting, having a staffing partnership can benefit the quantity and quality of your candidates, saving your company time, money, and re...

﻿By signing the CEO Action for Diversity & Inclusion pledge, Seth takes part in this vital moment of history, both for our community and the workforce...